Section III: Return to the Moon to Stay

While Mars is clearly the ultimate goal of human exploration beyond low earth orbit, we have neither the infrastructure nor the experience to accomplish this goal without intermediary steps.  The laudable efforts of the Mars Society not withstanding, a Mars mission as envisioned by Dr. Zubrin would involve several untested technologies, a single mission duration exceeding the experience of any space traveler, and more EVA time than the entire cumulative experience of the astronaut and cosmonaut corps combined.  Returning to the moon allows the space program to build up the infrastructure required to support sustained operations beyond the influence of the Earth and to develop and test technologies required for interplanetary expeditions in a challenging, rewarding and nearby location.

This section details a timetable and vessels for creating an outpost and the Earth-moon LaGrange 1 point (L1) and using that station to support a sustained human lunar presence near the moon's South Pole.

L1, located 5/6th of the way to the moon, is the point of balance between the Earth's and the moon's gravitational influence.  It has been described as the gateway to the solar system, as only small changes in velocity allow transits to interplanetary space, other Lagrange points, the moon or back to the Earth.  It is a point always in communication with the Earth and is located just 3-5 days transit time from the Earth and only one day from the moon.  It also allows near equal access (in terms of changes in velocity and therefore fuel requirements) to any point on the moon at any time, making it ideal for flexible exploration and emergency return.  A vehicle traveling from the Earth to L1 requires approximately 800 m/s delta v to break on arrival, and in the neighborhood of 100 m/s to leave towards the Earth, other LaGrange points or lunar orbit.  Travel any point on the moon requires less than 2,500 m/s each way.

Benefits of the Lunar South Pole

The lunar southern polar region is most interesting to scientists because of the probable presence of frozen water inside permanently darkened craters.  It is most interesting as a potential lunar base because some mountaintops and crater rims are in permanent sunshine, allowing for continuous solar energy and also because its temperature (~ -65°C is similar to surface temperatures on Mars.  Claimed justifications for long term human lunar exploration and outposts include mining for space construction materials and extracting helium 3 for fusion power plants.  These reasons do not justify any foreseeable lunar exploration, as mineral extraction would be cheaper from Near Earth Asteroids and because no fusion power plants exist.  More reasonable justifications for a human lunar presence include exploring the south polar region for ices, searching for early earth meteorites preserved on the moon and testing technologies, equipment and procedures for use on Mars.

Year 1 in this plan corresponds to the 2008-2010 timeframe.  Each mission would deliver 10-11mt of cargo to L1 using a stretch "Heavy" upper stage, or launch an Aquila spaceplane to the L1 station.  Expendable lunar cargo missions would pass though L1 on their way to deliver over 4mt to the lunar surface.

The first mission during the first year of operations would deploy a MiniMir (detailed below) space station module to L1.  The design of this space station supports launch within the payload fairings of a Medium 5m or a Heavy Delta IV vehicle, allowing versatility for a variety of potential missions to low earth orbit as well as the lunar LaGrange points.

Stripped-down versions of the MiniMir station's 4.4m long central compartment can serve as the basis of the crew module for IIS expansion, the modules of the surface lunar base and the crew compartment of a long duration deep space vessel, as detailed in Section IV.

At L1, a station will need maneuver fuel to maintain position.  Attachment of two 3,740m2 solar sails would provide enough thrust to stabilize 20mt of station, modules and docked vehicles, limiting the need for constant thruster fuel resupply.  The two sail modules, delivered on a subsequent cargo flight, would be almost 20m wide and nearly 200m long and provide a modest, but real test of solar sailing propulsion and control.

Once the station reaches L1, a second cargo launch will deliver an unfueled lunar Lander, a Utility Pod and over 3mt of supplies to the station.  The best option for delivering cargo to L1 is a direct launch of a "Heavy" vehicle, with the stretched second stage providing the boost to reach L1 and then restarting a final time to provide the ~800 m/s delta v required to brake at L1.

Other options for delivering cargo to L1 (or to lunar orbit for that matter) involve use of low energy transfer orbits taking in the order of 6-9 months to reach the final destination or utilizing low thrust, high specific impulse engines (ion or Hall thruster). While such solutions could significantly increase the payload mass delivered, they also introduce problems.

For a low energy transit, the long transit times of such vehicles make them unsuitable for use with hydrogen fuel (boil-off, tank mass and cooling become serious concerns) and make such fuel unsuitable for cargo landers. Switching to liquid methane fuel effectively counters the benefits of increased mass delivery.

For high specific impulse vehicles, a slow passage through the Van Allen belts limits the effectiveness of a solar powered boost from low earth orbit, and even a 100 kW electric ion vehicle using 22 Boeing 25cm XIPS ion thrusters would still take over 7 months to reach L1 with an effective delta v of about 500 m/s per month.  A nuclear powered (Prometheus-based) cargo tug could have some utility, but the transit time would not be any shorter than a solar powered vehicle, and high cost would require reusability, therefore some form of earth return capability and the associated environmental concerns.

Cargo to the Lunar Surface

The lunar cargo lander, a 10mt vehicle equipped with a single RL10B-2 LH2/LO2 engine is detailed below.

The crewed Lunar Lander is designed for single stage reusable transit between L1 and the lunar surface.  Its fuel load is designed to provide enough energy for a round trip mission between L1 and the moon, followed by resupply with a new loaded fuel tank by a single 10.4mt cargo mission.  Using liquid methane and liquid oxygen allows longer term storage on the lunar surface than for a higher energy liquid hydrogen fuel vehicle, and allows the utilization of the same engines developed for the Aquila spaceplane.  The Lander is not designed for extended operations. It is designed for the one day transit between L1 and a surface station or pressured Rover where the crew would conduct a long duration mission.

Incidentally, a delta v of 5,000 m/s and a total thrust of 6mt force also allows a modified version of the lunar Lander to serve as a Mars Lander, as detailed in Section IV.


Note: An alternate version of the lander utilizing two RL10B-2 engines (for redundancy - one provides more than sufficient thrust) and assuming a well-insulated fuel tank massing 10% of the fuel load, could also support the L1 to lunar surface at slightly better performance, lower total mass.  It would require a 9.4mt loaded tank resupply mass and a tank 1m taller than the straw liquid oxygen/methane design.  It would, however, still suffer from hydrogen boil-off, limiting its surface storage lifetime and thus the length of surface missions.

The Utility Pod is a derivative of the lander crew module designed for zero g and low (less than a few thousands of a g) gravity operations.  Its main purpose is to support construction, maintenance and operations at L1, though it could also transit to L2, lunar orbit or further.  Utilizing two 5m manipulator arms, it can operate with a crew or through a remote operator.  The pod is also suitable for excursions from a transfer vessel to small asteroids or the Martian moons.

The Rover as envisioned for this program is drastically different than the vehicle utilized by the Apollo program.  Essentially a small mobile habitat, the fuel cell-powered Rover will be the first cargo delivered to the lunar surface.

In a program to establish a base near the south lunar pole, preliminary robotic missions (Year Zero) will provide detailed photos of the targeted region from orbit and land a small robotic rover to survey landing sites suitable for cargo lander deployment.  The first cargo lander will deliver the Rover to the designated landing zone.  The Rover will then autonomously deploy from the lander, verify and possibly clear (using its 5m manipulator arms) the landing zone, and provide shelter for the first lunar expedition crew as they support the deployment of the lunar base habitat.

Recharged via solar arrays, the fuel cells provide power for extended operations in the south polar area.  In an extended program, additional Rovers could be deployed to other lunar locations for crewed or remote operations far from a lunar base.

The first two person lunar expedition will travel aboard an Aquila to the MiniMir, arriving to find a station equipped with a Utility Pod and fueled Lunar Lander.  This transit will take 3-5 days.  The crew will then spend a week unloading additional supplies, checking out the station, and then, with the Rover waiting for them on the lunar surface, make the single day transit to the lunar surface.

After landing, they will board the Rover, mark out a landing area for the next lunar cargo lander with homing beacons and await the arrival of the core lunar base module.  The core module will provide basic shelter, life support, power and communications systems and serve as the laboratory area of the extended base, though a crew could camp within its confines for a month-long mission.

The Rover will serve as the initial airlock of this base module, allowing the base to remain pressurized at all times.  This first expedition will conduct only limited exploration during their few weeks on the surface and concentrate mostly on preparing the lunar base site for future cargo and crewed delivery missions.  With the core base set up, the first crew will fly the Lander back to L1, transfer to the Aquila, and return to Earth.

The second year of operations will concentrate on fully equipping the lunar base and conducting explorations within a few hours drive of the base.  Two separate 60-90 day expeditions with a crew of two or three will pass through the MiniMir station, board the refueled Lander and work to unload supplies and expand the lunar base.

Expedition 2 will support the arrival of the living quarters module of the lunar base, a twin to the core module, but providing extended accommodations and supplies.

Expedition 3 will install a full airlock module, additional supplies and extend power capacity to the base, allowing it to support subsequent crews for extended operations.

At the end of the third lunar expedition, the base will be ready for annual operations to support two 120 day three member expedition crews conducting more extensive lunar operations and expeditions.

If budget and interest allows, both the MiniMir station at L1 and the lunar base can expand to support larger crews or continuous operations.  Additional surface or LaGrange stations can utilize the same infrastructure to achieve specific goals, including support of Earth-moon L2 operations, lunar farside or equatorial surface installations, or Rover-supported exploration of specific lunar areas.  The MiniMir station can also expand with additional modules to support these operations and the multiple vehicles that would operate from L1. 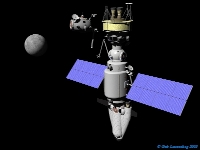 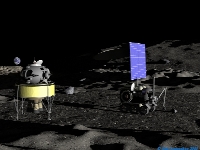